Space for the MySpace generation 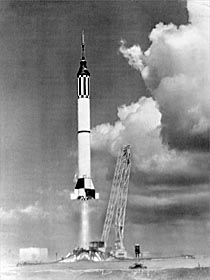 Great way to start the new year -- with the federal government closed for the day. (To commemorate the passing of our 38th president, recall Gerald Ford's space policy legacy.)

And while fed folks are off, let's talk about some of 'em behind their backs. How about NASA? Back in the day, nothing was cooler than NASA.

Now in The Space Review Jeff Foust picks up on an AP article (published during the holiday news slow-down last week) that revisited a Dittmar survey of 18-24 year olds' attitudes toward the US space program. The survey revealed some serious apathy among the YouTube, Google, MySpace generation about manned spaceflight and NASA's vision.

Boomers were born loving the big civil space program. Times change. But good news for private space, as Jeff points out -- the survey found "while just over half thought NASA to be irrelevant to their lives, 61 percent found that space tourism and related 'NewSpace' ventures were relevant or very relevant to them."

As Rand Simberg comments, "The public isn't looking for heroes in space. They want to be the heroes and heroines themselves. That's what the Utube revolution is all about."

Meanwhile, as the spin engineers at NASA grapple with the fact that it may be easier for the space agency to reach the moon and Mars than the hearts and minds of Generation Y, Alan Boyle overviews the year in space 2006 (his article is subtitled, "America on the rise again, with boosts from Russia." Interesting.)

(And speaking of opinion surveys, here is MSNBC's live vote of the top space story of 2006 and top trends of 2007.)

* * *
Image: Liftoff, Mercury-Redstone rocket carrying astronaut Alan Shepard, the first American in space, May 5,1961. Those were the days.