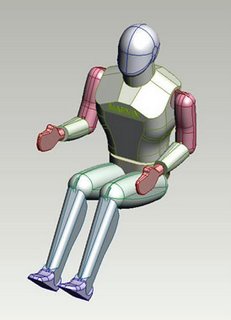 Apart from China's sudden urge to blast apart its Feng Yun or "wind and cloud" spacecraft resulting in a waste of a perfectly good weather satellite and triggering worries about a space arms race, the cloud of orbital debris caused by the intentional explosion raises serious concern. One good reference, as I've posted, is The Ballistic Missile Defense System and its Effects on the Outer Space Environment, in which Steve Mirmina, senior attorney in NASA's Office of the General Council (JSL, 2005; writing in his personal capacity) looks at some interesting international space and enviornmental law issues at play. And yes, China is a party to the Liability Convention. (Of course, triggering the treaty may be the easy part. Proving ownership of any damaging debris could be a bit trickier.)

On a more peaceful note, for those who missed both the live roundtable and Webcast yesterday on space law and globalization, the National Center for Remote Sensing, Air and Space Law (NCRSASL) will be putting online a Webcast recording and also offering a DVD of the event. I'll post an update when all that becomes available.

Meanwhile, speaking of events at NCRSASL, the Center, along with the University of Mississippi Alumni Association, will be hosting a Journal of Space Law reunion in Oxford, Mississippi on Apr. 13, 2007, featuring keynote speaker Justice Kay B. Cobb of the Mississippi Supreme Court who served as editor-in-chief of the Journal in 1977. A lovely gathering.

Reminder: Feb 15 is the deadline for commenting on the Draft UNIDROIT Space Assets Protocol. Get your comments to Prof. Mark Sundahl.

More static about that possible satellite radio merger -- FCC says Sirius and XM licenses can't be combined. (But can they be modified?)

At the three year anniversary of President Bush's announcement of the Vision for Space Exploration, Jeff Foust looks ahead at near-term challenges for the program. (The Space Review)

Also in The Space Review, Taylor Dinerman uses some words you don't hear in polite space society --"colonization", "conquest", "exploitation", "settlement", "industrialization" and more -- and calls for revisions to the Outer Space Treaty to "enshrine property rights and a broadly 'American' view of human freedom" for human settlements beyond Earth. (Such potty mouth! ;)

Ryan Zelnio looks at some studies on the economic impact of spaceports.

Yes, it's LegalTech time again, "the most important legal technology event of the year," Jan. 29-31, 2007 in NYC. Hi to my old pals from American Lawyer Media. (Space lawdroids welcome, I assume.)

Dick Stafford subscribes to the new zine, LAUNCH and reports founding editor Mark Mayfield has lined up veteran space writer James Oberg as a contributor. Super. As Dick tells it, LAUNCH "interviews will include actors, politicians, scientists, TV anchors, and even astronauts." What, no space lawyers?

To heck with law school. The Rocket Dungeon master suggests some rocket classes.

Congratulations to Starchaser on winning a $200,000 study contract from the European Space Agency.

The team is reportedly quite happy with the smooth progress so far as SpaceX moves carefully closer to Falcon 1 liftoff. Meanwhile, Elon says "don't hold your breath for this launch." No worries, Elon. We'll breathe later. ;)

Finally, this blog is not Space Bunny Probe, but honorable mention goes to three civic-minded Playboy Playmates (circa '67, '69) whose impressive images made it all the way to the moon and back, are now are enshrined (if you can find 'em, and many have) on this G-rated government Web site devoted to Apollo 12. Yes, your space tax dollars at play ;).

Have a breathless weekend.

* * *
Image: No, no Playboy space bunnies. This is fully clothed "Marvin" the "virtual astronaut" - courtesy of Starchaser Industries.