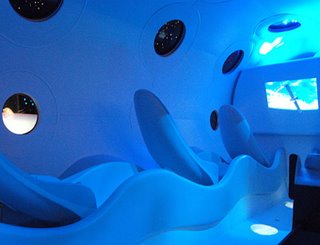 Here in New York, celebrity billionaires are a dollar a dozen. One way to make a big impression is to arrive at Javits Convention Center for Wired's Nextfest with a mockup of your own photogenic commercial spaceship -- or at least a tantalizing, ready-for-close-ups piece of it. Which, as it happens, is just Sir Richard Branson's style. Even Governor Pataki, who has never publicly admitted to coveting a spaceport for his state, will come to greet you.

Jeff Foust and Michael Belfiore showed up shoeless (we don't want to scuff the material) and with digital cameras to sit in the cool, cozy SS2 cabin and experience Virgin Galactic's coming out party in New York. Alan Boyle also covered the event.

I made it over on Saturday morning for NextFest's panel on "The New Vactionauts," with Eric Anderson (Space Adventures), Peter Diamandis (X Prize and, you know, everything else), Chris Shank (NASA), Alex Tai (Virgin Galactic) and Granger Whitelaw (Rocket Racing League). The panel was upbeat indeed after Sir Richard's appearance on Thursday, Anousheh Ansari's success, the upcoming happenings at Las Cruces, etc.

You had to dig all the videos. Eric proudly showed the one of Anousheh onboard ISS (which I posted here last week). Alex showed the eye-filling "Let the Journey Begin" about a ride on SS2 (now you don't have to just imagine what $200,000 can buy). And the RRL folks always have awesome eye candy.

When Alex talks about Virgin's plan you never heard the word "safety" so much. (The lawyers must have got to the guy.)

(Later, I did snap a picture of Eric sitting in the SS2 cabin, and another of him and Alex together, but I don't have my camera handy to post them. See Jeff's flickr pictures here.)

Of course, space exploration was only one of the categories of cool new things covered at NextFest. But after taking seeing the SpaceShipTwo mockup and the fun everyone had at the Virgin Galactic exhibit, a lot of the attention-grabbing robots running around the show came over and told me -- off the record of course -- that they were secretly jealous of the humans.