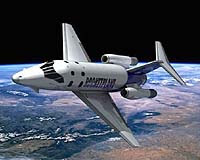 Not for full-fledged, hardcore, xtreme members of our NewSpace era only: if you missed the space scene out at Las Cruces and Holloman Air Force Base last week and over the weekend, there's always blogspace for catching up. Thanks to Alan Boyle, Clark Lindsey, Rand Simberg, Jeff Foust and everyone who live blogged the action from the International Symposium for Personal Spaceflight and the far out X Prize Cup.

Scroll through dispatches from the commercial space frontier for recaps and multimedia of the Lunar Lander Challenge, (I like the positive spin in the event's press release: Armadillo missed by only seven seconds. Next year they win), along with payloads of news from New Mexico including Rocketplane Global's unveiling of the reshaped, roomier and beefier XP suborbital spaceplane, Orbital Outfitters voguing of the first commercial spacesuit (strike a space pose; and I might know a few subway riders who'd like to wear it for their commute to the office), Rocket Racing League's announcement of new teams, and lots more.