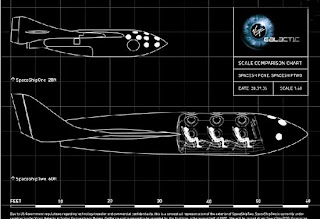 It is perhaps some consolation to the family and friends of Charles Glen May, Eric Blackwell and Todd Ivens that the explosion happened on the ground and no spaceflight participants were injured or at all involved.

As the personal spaceflight community along with its friends and supporters continue to sort through shock and sadness in the aftermath of last Thursday's tragedy at Mojave Air and Space Port, many industry insiders and others have quickly termed the fatal event an "industrial accident." It was not a space vehicle crash, a failed launch or landing, a suborbital mishap of any kind; although as Alan Boyle and others suggest, this was still about spaceflight.

On a bright note, as Jeff Foust observes in The Space Review this week: "The long-term implications of this particular accident are, at this early stage, too early to determine, but given the lack of mainstream media attention outside of local and industry circles, there is at least so far no evidence of a strong negative reaction from the public to this tragedy."

(Of course, the headlines writers were a bit busy typing "N A S A." As Rand Simberg quipped, "It's ironic and amusing that NASA's latest foibles may knock the biggest accident to affect NewSpace off the headlines....")

The initial reaction could have been worse. It remains to be seen whether the public may have some tolerance for a bit of danger in this business after all.

Meanwhile, public perceptions aside, the folks in this industry who are paid to worry have been doing their jobs all along. No one specifically mentioned a nitrous oxide exxplosion during testing. But the space tourism accident that will come is always a topic at commercial space conferences and events, including this month's NewSpace 2007 in Arlington, Virginia. There's always a panel or two at entrepreneurial events along the lines of "Surviving a Bad Day in Space: Risk Management Architecture," which at NewSpace was chaired by aerospace litigator Doug Griffith, and included Bretton Alexander, Kelly Alton and NTSB investigator Bob Benzon. Jeff looked back at that panel in The Space Review in his article, Preparing for the worst. And Clark Lindsey live blogged the panel here.

Jeff notes that the words space transportation is inherently risky "are, quite literally, the law of the land in the United States, part of the Commercial Space Launch Amendments Act of 2004."

What if anything should have been done differently last week at Mojave? What will be done differently now? How will investors, insurers, regulators and participants respond to and chalk up the accident? Without knowing what happened to cause the nitrous oxide explosion, it is too soon to even speculate (legally speaking, anyway). Of course, the injured and families of the lost Scaled employees will be entitled to compensation. For now, California OSHA and the company will proceed with investigations. (For its part, FAA/AST has not publicly commented on the event.) Much more to come.