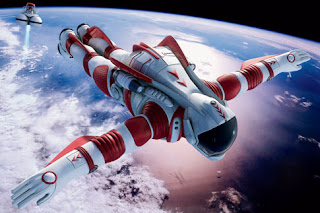 (I tried. But I seriously could not resist swiping this hot image for the Flybys. Thank you PopSci.)

Yes, in light of all the buzz this week about Orbital Outfitters' new xtreme sport idea, -- or, if you prefer, backup suborbital safety feature -- (if Rick Tumlinson and Jonathan Clark do it, we'll follow), maybe I should call this post Friday Divebys? Nah...

OK, before we space dive into the weekend...

Oh, and lest I forget:

Big congratulations to Bigelow Aerospace on the Genesis II launch! To quote Mission Control in Las Vegas when it made contact with the spacecraft, “We got it!"

Finally, I'm not an almun but happy graduation from this Bronx girl to the hardworking kids at Bronx Aerospace High School.

Have a great weekend, all. And unless you're really, really, really bored, don't watch any silly videos of people lined up outside the Apple store in NYC waiting to buy an iPhone. But if you do get an iPhone, call me.