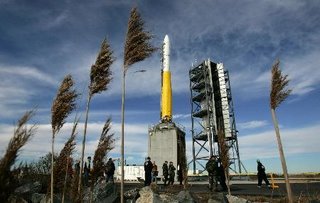 Attention, states that are serious about spaceports: take a look at the legislation pending in the forward-thinking Commonwealth of Virginia -- House Bill 3184 -- the nation's first Spaceflight Liability and Immunity Act, which flew through the 100-member House of Delegates this week by a vote of 99-0.

The Act would grant to spaceflight entities immunity from negligence or wrongful death claims brought by suborbital flight participants (passengers and crew). That's one small bill for state tort law. One giant leap for personal spaceflight business in Virginia.

Under the proposed Virginia regime, to obtain immunity from liability a spaceflight entity must have its spaceflight participants read and sign a document that says:

The immunity does not cover gross negligence, willful or wanton disregard for safety, or intentional torts.

What is the existing law on all this in the Commonwealth? Courts in Virginia have consistently held waivers of claims void as against public policy. (In Hiett v. Lake Barcroft Community Assoc., 244 Va.191, 418 S.E.2d 894 (1992), where injured triathalon competitor signed an entry form containing a waiver of claims for injuries, the court held "since the decision in Johnson's Adm'x v. Richmond and Danville R.R.Co., 86 Va.975, 11 S.E. 829 (1890), the law in Virginia 'has been settled that an agreement entered into prior to any injury, releasing a tortfeasor from liability for negligence resulting in personal injury, is void because it violates public policy.'" See also, Aldridge v. Atlantic Rural Exposition, Inc., 13 Cir. LS22264, 67 Va. Cir. 404 (2005); and, Estes Express Lines, et al v. Chopper Express, Inc., 13 Cir LS26714 (2005), citing ol' Johnson: to uphold the agreement in question would be "to hold it was competent for one party to put the other parties to the contract at the mercy if its own misconduct, which can never be lawfully done where an enlightened system of jurisprudence prevails. Public policy forbids it, and contracts against public policy are void."

HB 3184 would preempt that state doctrine as to personal spaceflight immunity. The statute specifies required language for informed consent.

(Compare: The federal regs of course do not require waiver of liability between space flight participants and permittees or licensees (§ 440.17 (e)).

Will other states follow Virginia's lead? Watch the jurisdictions with spaceport dreams. For now, states and state courts are all over the map on this. For more background, take a look at FAA's Quarterly Launch Report for the 4th Quarter 2006 for a Special Report: Waivers of Liability: Are They Enough for Permittees and Licensees? -- which includes a quick overview of spaceflight participant liability waiver law in Alaska, California, Florida, New Mexico, Oklahoma, Texas, Washington and Wisconsin.

Jack Kennedy of Spaceports blog reports the next step foe the Virginia House measure is deliberation by the Senate Courts of Justice Committee; if approved by the Senate Committee the bill moves to the floor of the Senate and then to Governor Tim Kaine for signature, amendment, or veto in the spring.

For purposes of this section:

"Spaceflight activities" means any activities necessary or antecedent to preparing, launching, carrying, or landing a participant on a suborbital flight.

"Suborbital" means a distance at or above 62.5 miles from the Earth's mean sea level.

2. Has actual knowledge or reasonably should have known of a dangerous condition on the land or in the facilities or equipment used in the spaceflight activities and the danger proximately causes injury, damage, or death to the participant; or

A. Every spaceflight entity providing spaceflight activities to a participant, whether or not such activities occur on or off a facility capable of launching a suborbital flight, shall have each participant sign the warning statement specified in subsection B.

B. The warning statement described in subsection A shall contain, at a minimum, the following statement:

C. Failure to comply with the requirements concerning the warning statement provided in this section shall prevent a spaceflight entity from invoking the privileges of immunity provided by this article.